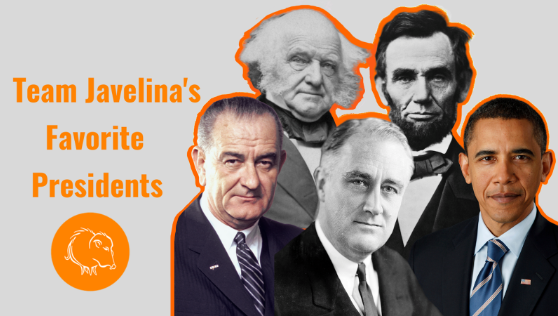 Although US History has certainly had its ups and downs, we have definitely had some great presidents lead our country. So, in honor of all the fascinating, change-inspiring leaders of the White House’s past, we asked team Javelina: Who is your favorite President?

I’m a huge American history buff, so I’m going with the most interesting president and not my favorite. Lyndon Johnson is, in my opinion, the most fascinating president. He’s probably one of the most economically progressive presidents in American history, and he was able to pass the Civil Rights and Voting Rights Acts. Despite those huge progressive victories, he championed the Vietnam War, and the activist base ended up pushing him out because of that.

Martin Van Buren. Of all of the presidents, he has the best hair! You can’t beat that– MVB is the MVP. 🙂 Jokes aside, I’d have to say President Obama is my favorite president, simply because I truly felt like our country was in such good hands.

Obama. He was the first one I got to vote for, and I was endlessly proud to do so.

FDR. His presidency was the last real time we invested meaningfully in this country and its people. It would be great to get back there.

FDR. He led the country through the Great Depression and WW2 and was still able to establish Social Security and expand on forest conservation. Plus, his fireside chats created a sense of transparency in the presidency.

President Lincoln. He was bold and strategic. His impact took the country one step closer to alignment with the core belief that everyone is created equal.

Barack Obama. He set a standard that (apparently) is quite difficult for others to meet.

Looks like the herd has a lot in common when it comes to our fave presidents!

Now we’re gonna turn the question back on you: Who is YOUR favorite president and why? Drop us your responses in our social media comments @javelinaco or shoot us an email at info@javelina.co — we’d love to know your answers!